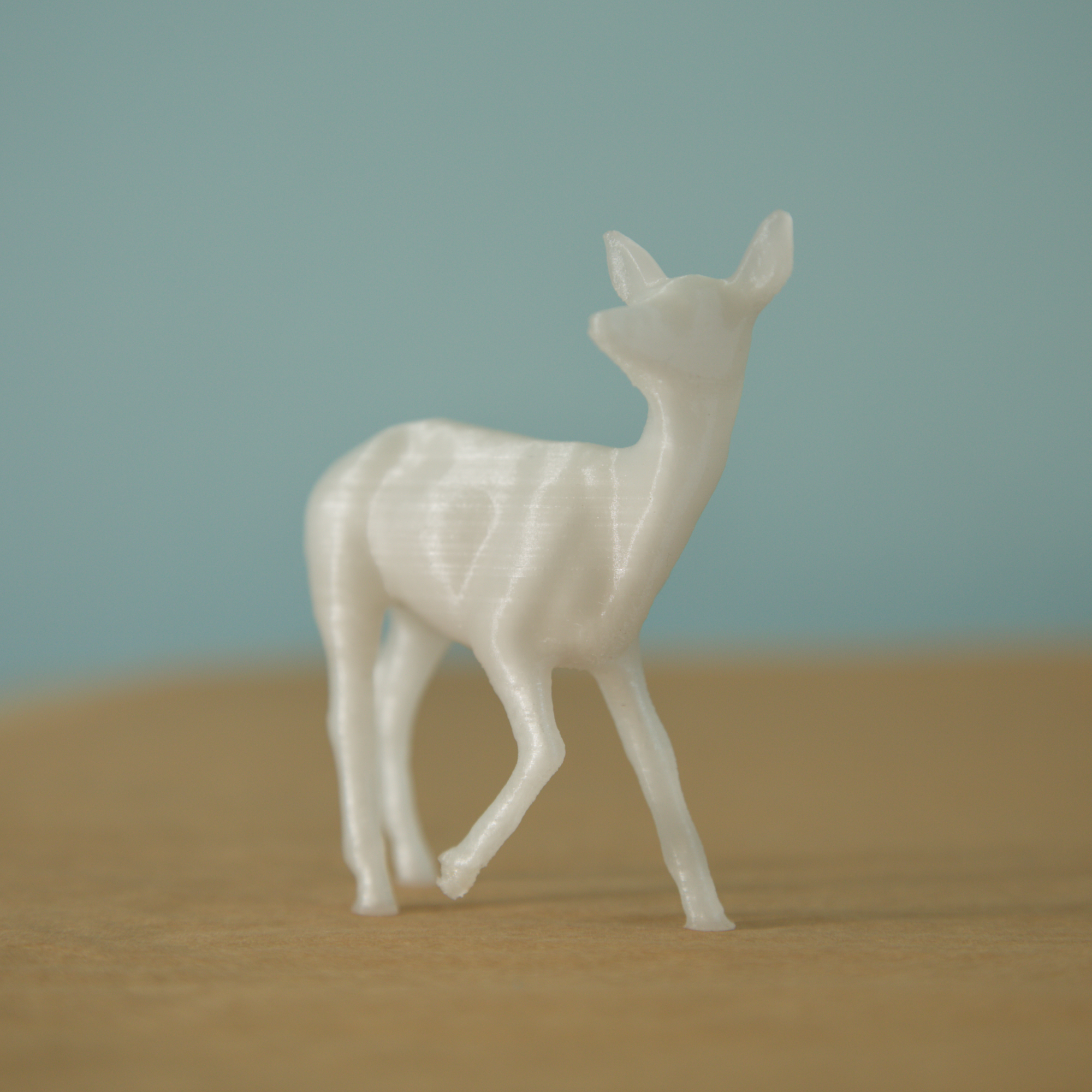 The first in a series of playsets depicting peculiar events in my life. While they are very different kinds of experiences, they share one important aspect. For me they provide hints of a non-ordinary reality. Large or small, these events stopped me in my tracks and made me look back and wonder. Over the years and decades, my mind keeps looping back to these events, as if they beg to be remembered.
[glow in the dark PLA, cardboard box]
Playset - Falling Deer GID (2021) 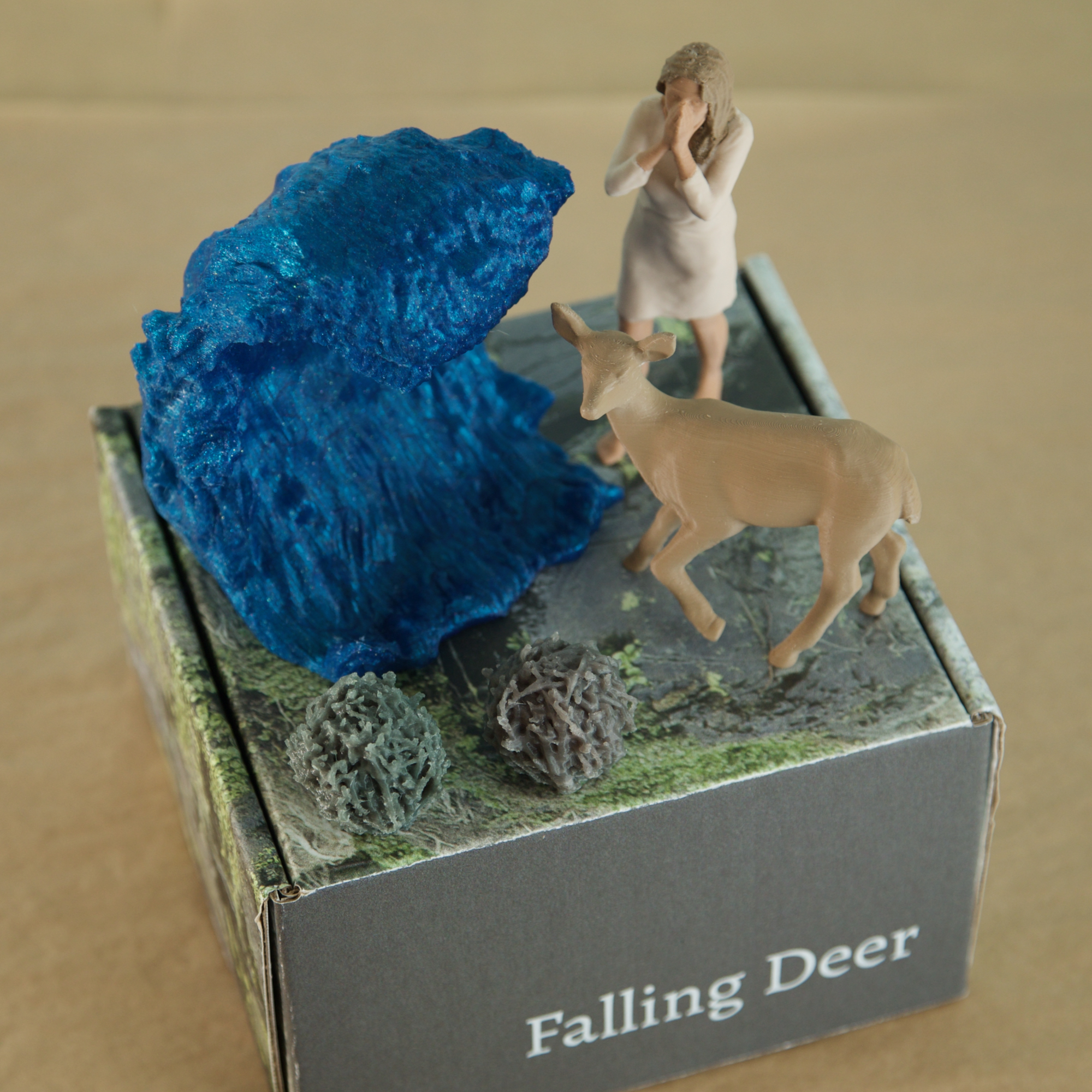 The first in a series of playsets depicting peculiar events in my life. While they are very different kinds of experiences, they share one important aspect. For me they provide hints of a non-ordinary reality. Large or small, these events stopped me in my tracks and made me look back and wonder. Over the years and decades, my mind keeps looping back to these events, as if they beg to be remembered.
[PLA, color changing PLA, cardboard box]
Playset - Falling Deer (2021)

A tactile visualization of a genealogical network connecting me with a woman currently on death row.
[Data Visualization Software, Crowdsourced data from geni.com, 6 feet diameter (19 yards) of Fabric]
We (2018)

Sleep Studies, Siglufjörđur, Iceland. A camera took one photograph every minute throughout the night in a room with a sleeping person. Software generated black and white visualizations by comparing two photographs directly following each other and placing a white pixel where the photographs are different.
[Sleeping People, Visualization Software, Local Wool]
Storied Seas: Sleep Studies (2017) 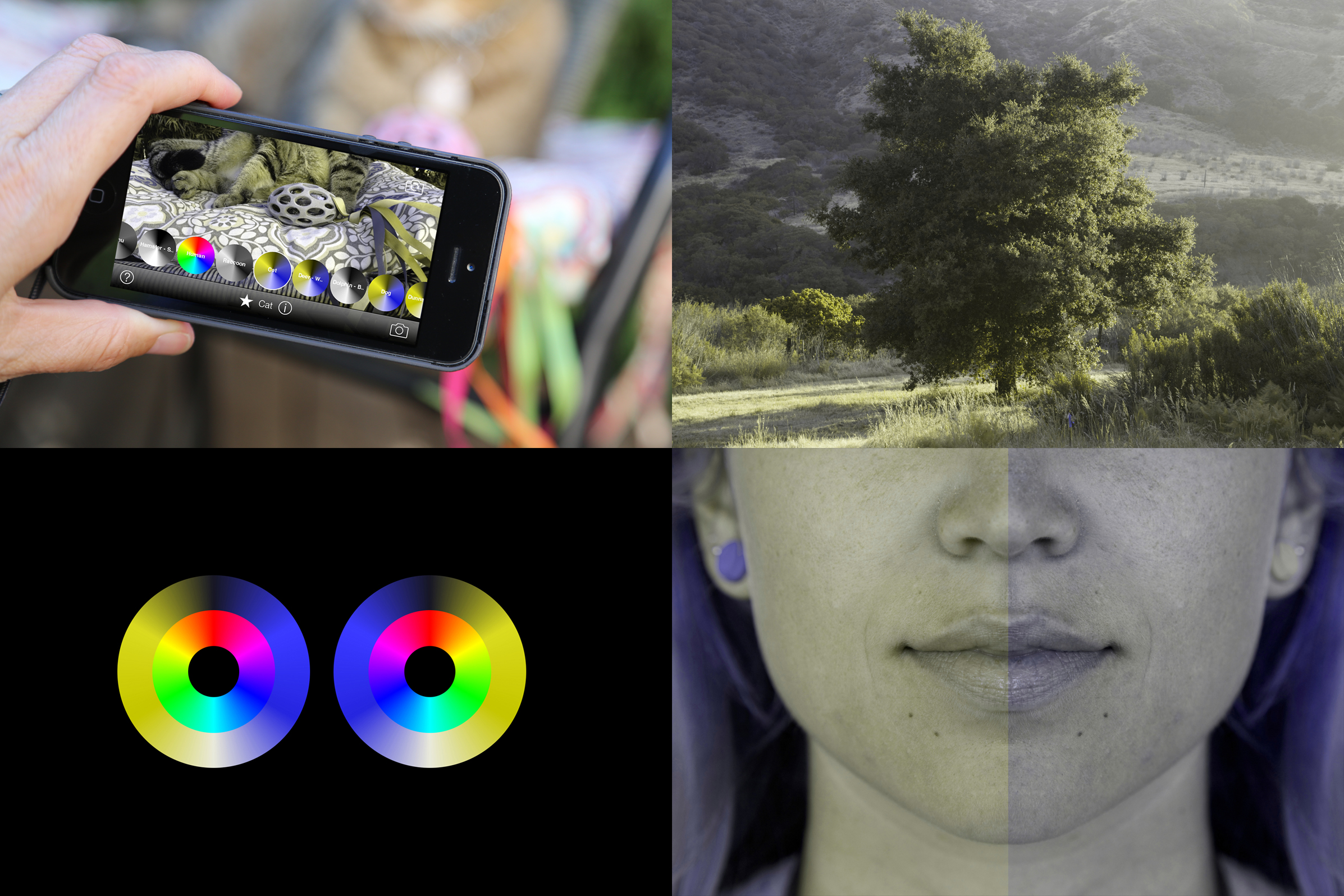 The project consists of photographs taken automatically every minute for five hours during a (haunted?) night, accompanied by images generated by software comparing the difference between two sequential photographs. It is an honest attempt to capture a ghost. The night in question, 5 days following my mothers passing, a TV set turned on by itself and a doll, given to me as a child by my mother, was moving across the floor, as witnessed by a mesmerized cat.
[Time-laps Photographs, Image Filtering Software]
Days Following: Difference (2009)

An update of the interface Migration from the project 1:1.
[Internet Visualization]
Migration (2005)

The Infome Imager software allows the user to create crawlers that gather data from the Web, and it provides methods for visualizing the collected data.
[Web Visualization Software]
Infome Imager Lite (2002 - 2006)

1:1 was a project created in 1999 that consisted of a database that would eventually contain the address of every Web site in the world and interfaces through which to view and use the database. 1:1(2) is a continuation of the project including a second database of addresses generated in 2001 and 2002 and interfaces that show and compare the data from both databases.
[Web Visualizations]
1:1 (2) (1999 - 2002)

A parasitic art system that acknowledge the web as a shared and intelligent space. The visitor answers a question related to the site and is assigned a color dependent on their answer, as the visitor navigates the site he/she leaves a trail of that color.
[Collaborative Information Filtering Software]
The Stillman Projects (1997 - 1999)

PAT was a software agent residing on the SJSU Switch Journal web server in the spring of 1995, monitoring, interpreting (according to the enneagram personality profiles) and responding to, the navigation of the users on the Switch web site. Each user was served different content depending on their behavior/type and their "mental health" was mapped. In collaboration with Ben Eakins and Mark Erikson.
[Software]
PAT (1995) 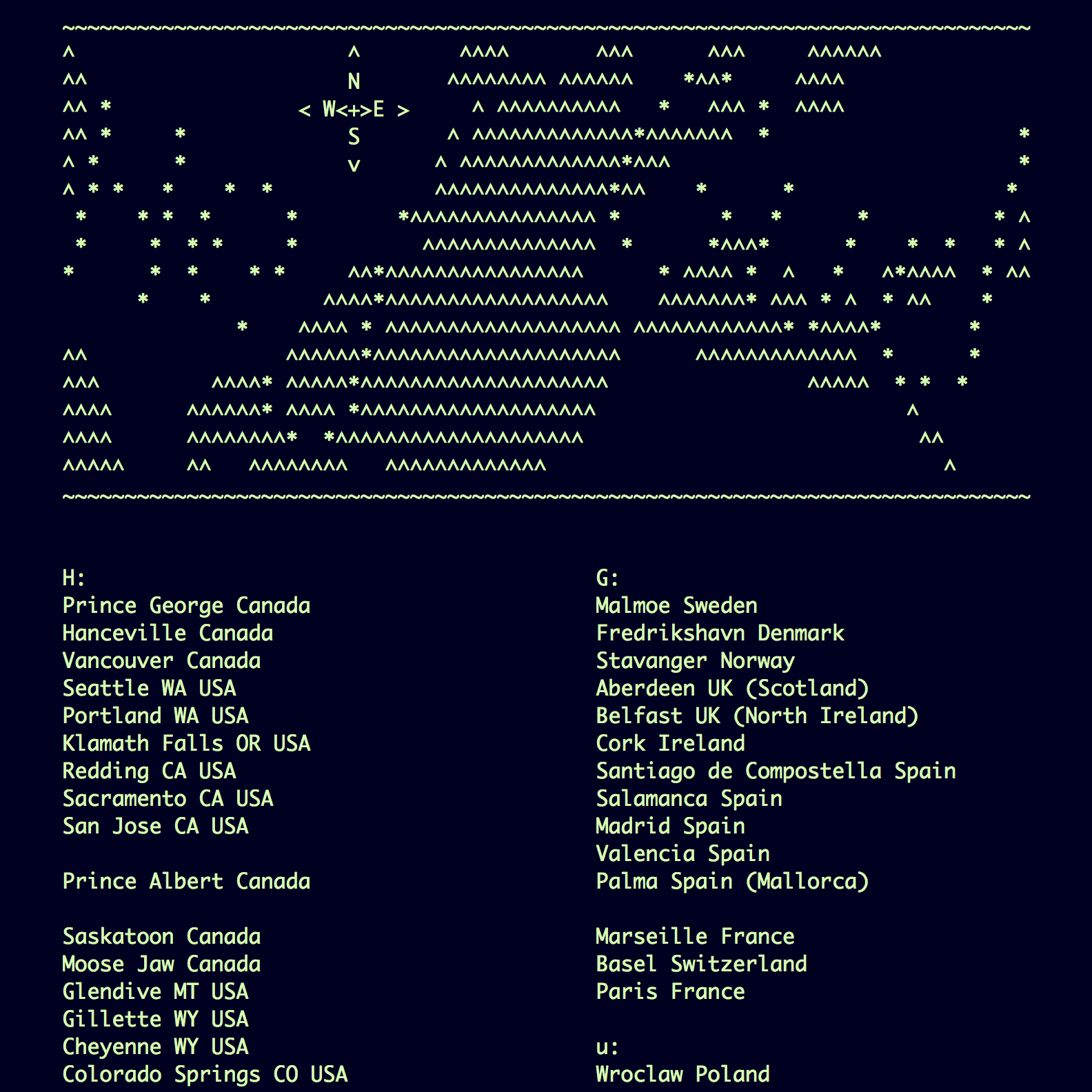 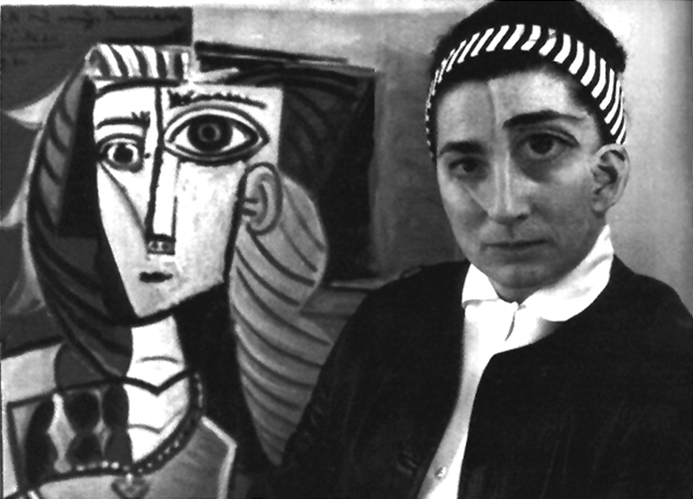 [Computer Manipulated Photography]
"Everybody Says She Doesn't Look Like This, It Doesn't Matter, She Will" (1991 - 1992) 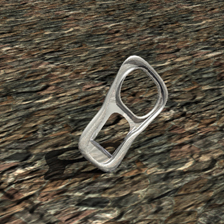 The original animation contained movies of modeled pieces of trash found on the ground intersepted by the new words added to the Oxford Dictionary of the English Language in 1995.
[3D Animation]
Virtual Reality Wannabe (0000 - 1995)
Lisa Jevbratt
Currently being updated Old website with some more info.
X Lisa Jevbratt
jevbratt@arts.ucsb.edu

I am an artist, professor of art, and the chair of the department of art at University of California Santa Barbara.

Although I have a traditional art education from my homeland Sweden, the medium that clicked, the one that made me an artist, is computer programming. It allowed me to make visualizations of huge data sets, revealing patterns far beyond what my mind could imagine. I hope to create systems that teaches us, you and me, something, systems that reveal truths my own mind could not imagine. Programming also makes it possible to make work that is intimate in the sense that it creates a personal point of entry, and a way to act, to make a shift, for the person interacting with it. I look at my work as collaborative systems where the audience and I become citizen scientist, making discoveries together. I have made software visualizing the structure of the internet and the web, image processing programs revealing ghost activity, and an app that helps us see how other animals see color.

There are many threads that lead to my current interest in fiber arts. On an aesthetic level my data visualization work connects strongly with various textile techniques such as weaving and knitting (as confirmed by the inclusion of my internet visualization work in the textile art exhibition Miniart Textile in Como, Italy in 2006.) The aesthetic similarities are an indication of deeper process-related and historical connections between computers and weaving. On a personal level programming and textile techniques both appeal to my affinity for mathematical and process-oriented thinking. Another entry point was my interest in the perceptions of non-human animals and our relationships with them. Over the years, in parallel with my programming classes, I have been investigating human animal relationships with my students in a class I call Interspecies Collaboration. This interest brought me to sheep and my fiber of choice – wool. (I have since become a certified sheep shearer and a certified wool classer, and I take herding lessons with my aussie).

My projects muddle accepted epistemologies with alternative ways of knowing. I see the plant dye art project I currently work on, "Invasive Species / Endemic Breeds – A Sensorial Mapping of Santa Cruz Island" as a data mapping of invasive species, investigating color and plants on a chemical level. My projects often have a scientific component, which in this project gets juxtaposed with alchemy and witchcraft, as the plants involved have a rich history of magical and medicinal use.